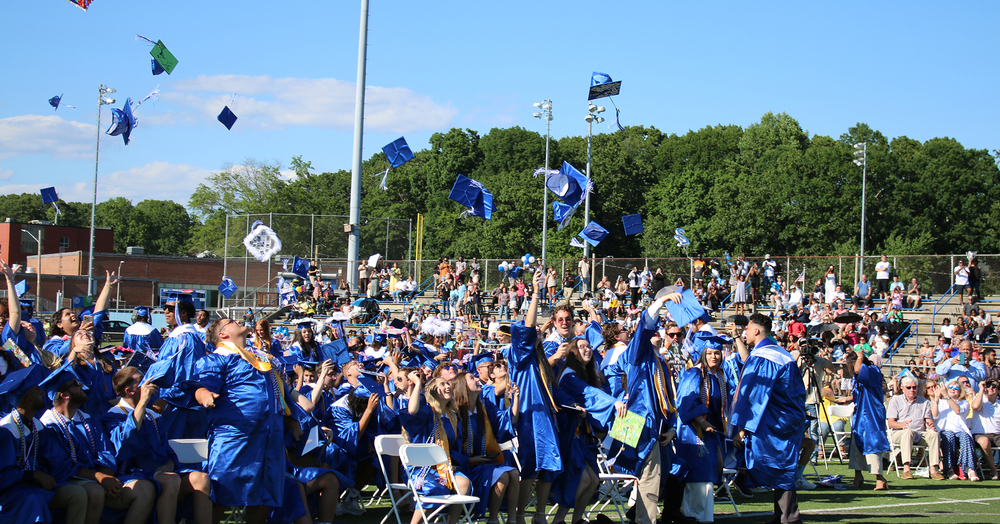 WHHS Hosts Commencement Ceremony for the Class of 2022

WEST HAVEN, Conn. – West Haven High School held its Commencement Ceremony for the Class of 2022 Tuesday evening on a beautiful sunny day at Ken Strong Stadium. In total, 381 students graduated from the Class of 2022, and 171 of them plan to attend college next year.

Danielle Ricketts, number three in the class and a student representative to the Board of Education, opened the commencement by leading the audience in the Pledge of Allegiance. Ricketts is one of two seniors from this impressive class to be accepted to Yale University. Following the pledge, Grace Nowak took the stage to sing The Star-Spangled Banner. Nowak is 14th in the class and plans to attend The Canterbury School next year. WHHS Principal Dana Paredes then began with her opening remarks and an introduction to the graduating Class of 2022.

“I had hoped last year would be the last time I would have to praise a class for their resilience in the face of a global pandemic, but unfortunately, the universe had other plans,” began Paredes. “This class demonstrated remarkable strength, overcoming the adversity caused by the pandemic for more than half of their high school career. Despite these challenges, this class managed to achieve in every capacity.”

Parades praised the class for all their accomplishments and laurels from the past year before introducing the Mayor of the City of West Haven, Nancy Rossi.

Mayor Rossi concluded her remarks with the following advice to the graduates, “Do not shy away from challenges, do not give up in the face of defeat, and always ask yourself, what did I learn from this experience?”

Following the conclusion of Mayor Rossi’s remarks, Paredes introduced Class President Khamar Whyte, and the Valedictorian and Salutatorian, Nabiha Khan and Henry Slomba, respectively. Khamar spoke to the audience, reflecting on his time as Class President while discussing the challenges that the Class of 2022 has endured due to the pandemic.

Henry Slomba, the Salutatorian, boasts a grade-point average (GPA) of 4.8725 and will attend the prestigious Cooper Union in the fall. The Cooper Union is a private college in New York City that grants degrees in art, architecture, and engineering.

Khan, the Valedictorian of the Class of 2022, boasts a GPA of 4.9533 and is a student representative to the Board of Education, a Peer Advocate, a member of the National Honor Society, President of HOSA, and Co-President of the debate team. She will be attending Yale University as a QuestBridge Scholar.

Khan took to the podium and gave an inspirational speech to her peers, in which she wrapped it up with the following quote, “today marks a new beginning,” she said. “A chance to rebuild, heal, and grow. I want you to remember the moments when you were laughing so hard you couldn’t breathe but I also want you to consider the times when your heart felt heavy as a stone because the truth is, life isn’t so fair, we as a class have experienced this. And I’m not going to tell you that it works out in the end because it might not, but you got to keep pushing so that one day when you tell your story, you don’t say I wish or I hope, but I did and I’ve done.”

“Your perseverance to get to this moment of recognition has not only made you well-regarded by your teachers and administrators but also your families,” added Assistant Superintendent Drenzek. “We have students attending schools next year such as Yale, Duke, the University of Pennsylvania, Arizona State, Gateway, the University of New Haven, Porter and Chester, Housatonic, and many more.”

Paredes then proceeded to read the roll as seniors came forward to receive their diplomas. Once the presentation was complete and every senior had their diploma, Paredes told the graduates they could turn their tassels as caps soared into the air.